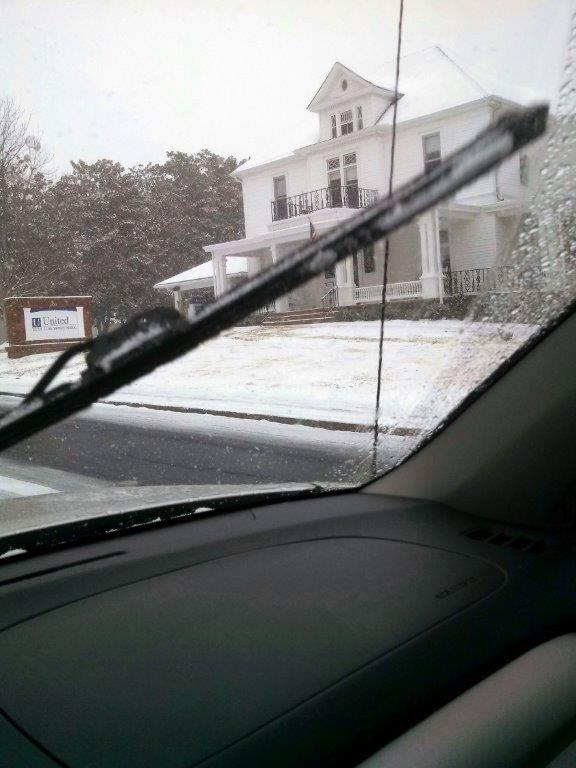 Watching each step in the snowy parking lot, I groaned as my car came into view. An inch of snow covered the windows, and I never owned an ice scraper. My stomach knotted as I replayed my son’s words. “Mom, if you’re coming home, you better leave now.” That was 12:30 p.m. It frightened me because Paul doesn’t over react.
I found a broken CD case and raked away the soft snow. Driving in snow would be much easier than driving in ice. I reminded the Lord I couldn’t drive in bad weather as I started my car.
Bumper to bumper traffic greeted me as I left the parking lot and entered Powder Springs Road. If only I had watched the weather, but the conference center I toured had no windows. Hoping for less traffic, I chose to go through Marietta square, but cars choked the roads.
Snow fell all around me, thick and white. I wanted to be at home. Lots of jobs awaited my attention, and besides I couldn’t do this. The desire to throw something gripped me, but I reasoned with myself. In eternity, this day will feel like a blip on the radar. A glance around told me I had nothing to focus my attention. If I had my kindle, I could write something, but I left that at home.
After I didn’t move for twenty minutes or so, I put my car in park and reached into the pocket of the driver’s door for Mom’s Bible. It fell open to the Psalms where she left numerous notes. Looking at her handwriting turned my insides to mush as memories came to mind. She never drove in snow, but Dad loved the challenge. I got interested in what she wrote and the passages she commented on.
Psalm 18:31 popped out at me. “For who is God, but the Lord? And who is a rock, except our God?” I reminded myself that the world does not revolve around me. Afterward, I prayed for several sick friends.
At times, traffic inched forward. I’d put aside the Bible and let the car move. It took several hours, but I made it to Marietta square. People walked along the side of the road with a bounce in their steps. One lady walked past my car with snow on her head. I rolled down my window and greeted her. As she returned my greeting, a mischievous smile lit up her face. Drivers leaned out of their cars to snap pictures. Many chuckled as if the whole thing were a party. Deepening snow didn’t feel like a party to me.
Traffic stopped again, and I went back to reading. “You have enlarged my steps under me, and my feet have not slipped.” That sounded like a good prayer for driving on ice, and I once more I begged God for safety, reminding him that I had no idea how to drive on ice.
Close to the hospital traffic quit moving again. Cars couldn’t go up an incline I’d never noticed, so I chose to use another road, navigating snow rather than ice. I kept praying for God to enlarge the space beneath me.
Dad put his car in low for hills so I thought I’d try that. I went ten miles per hour till the person in front stopped at an overpass. The man behind me got out and talked to her. He instructed her to use low and inch along. That confirmed I’d made the right choice, and I relaxed some. Each time I got the chance to move forward, I chatted with myself to remain calm.
Ray called me several times, asking if I was home. He got upset when I described where I was. We discussed the safest route, but driving got harder. Snow and darkness makes things look different. At last, I got in the turn lane, hoping I was close to the route we chose. Rushing along at seven miles per hour amazed me. Traffic I passed contained stalled and abandoned cars.
Things again got sluggish again on Piedmont. By now my legs ached since I’d been driving for eight hours or so. An abandoned car caused part of the delay. Further on, a man directed traffic. He told me he allowed one car to get up the hill before the next one started. I made the hill fine. From there I turned onto Bells Ferry. But traffic ahead was stopped. People walked past my car, and I asked one lady what the road looked like.
“You can’t get through.” She pointed the way I needed to go. “There’s several abandoned buses.”
Tears came to my eyes. My car did okay for a few more miles. I prayed and inched along. When the entire car almost slid sideways into an empty bus, I decided I better look for a place to pull off. My GPS proclaimed I was about two miles from home, and I pulled off into a subdivision. A man and his wife offered to let me park in their driveway. I called my boys, and they agreed to come for me.
From about 9:30 or so, I chatted with the couple in their home. When my boys arrived, they brought shoes with traction and warm wraps for the walk. My GPS must have been confused because they clocked the distance as 3.7 miles.
The walk home was cold and icy. We came across two cars jackknifed. The first lady spun and hit the other. My boys helped get the cars back on the road. Further down, another car lay on its side, and yet another appeared to be wrecked and abandoned. We tried to stay in the soft snow, where we had traction. The roads were frozen, and treacherous. What a relief to arrive home at 11 p.m. 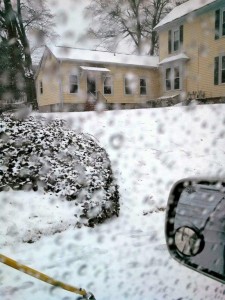 A view from my car